Adapted and Directed by JoAnn Gracey 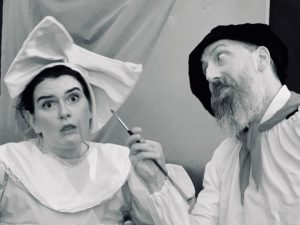 Hip Pocket Theatre is proud to present the World Premiere of Baby Snooks and Daddy – an adaptation of scripts from the classic 1940’s radio show of the same name. Originally appearing 75 years ago on CBS, the show starred comedian Fanny Brice as a mischievous young girl who was 40 years younger than the actress who played her when she first went on the air.

The radio program pulls the cast in one-by-one to join in the action. Adapter and Director, JoAnn Gracey, says, “I wanted to explore the idea of imagination; what we visualize while we listen to radio shows. But mostly it was a chance to go back and play around with this very funny material from the past. The Baby Snooks Show was around in a very stressful time. It was a chance to turn on the radio and forget – for a moment – all the terrible news in the world. I hope that this show is the same: a moment we can spend together, enjoying a little silliness. No agenda. No life lessons. Just a little fun.”

The play begins promptly at 9 PM with absolutely no late seating. Gates open at 7 PM, so come enjoy a magical night under the stars.

Hip Pass
$100  Adult
$75   Senior/Teacher/Military
The Hip Pass gives you 10 admissions for half the box office price.